One of the many complaints doctors get from patients is… “When I sneeze, my back hurts!” Back pain can be triggered by sneezing or coughing for a number of reasons, despite sounding unusual.

When you cough, sneeze, or even laugh, pressure builds up in your system which then radiates outwards. Muscles clench in response and may activate the nerves around an injury or create enough strain to trigger your body’s pain receptors. 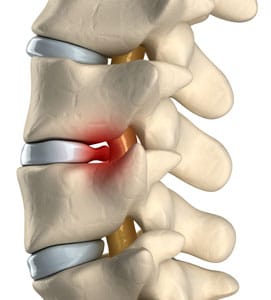 One of the more serious causes of lower back pain when coughing is a herniated, bulging, or ruptured disc. Coughing jars the inflamed tissues around the disc and may force the back muscles to contract, resulting in spasms or other sharp pains. Severe pain when sneezing may also be a sign of disc injury.

Normally, disc problems are accompanied by intense pain or spasms, but this is not always the case. Herniated or otherwise damaged discs sometimes go unnoticed until exposed in an x-ray or MRI.

If you also experience other symptoms, such as pain radiating down the leg or arm or numbness below the waist, they may be indications of a serious disc issue and you should consult with your physician immediately.

During cases of severe colds or pneumonia, you may experience frequent coughing fits. Coughing too much may result in a pulled muscle. This is less likely with milder symptoms, and is best treated with a good cough suppressant or expectorant.

Unlike a common cold, the Mayo Clinic lists back pain as a common symptom of the flu, and sneezing or coughing fits from this illness may create sharp, sudden pains throughout your recovery. When we’re sick, pain seems to get amplified no matter where.

That’s why it sometimes even feels like our hair hurts when we’re really under the weather. Almost unnoticeable back pain seems to suddenly turn into severe pain when we have a cold.

One of the many side effects of smoking is known as “smoker’s cough”. This harsh, repetitive coughing strains the back and can lead to pain.

Another side effect of smoking is a decrease in several nutrients needed by the muscles in the back for proper metabolism. Such malnourishment increases the chances of muscle spasms which are easily triggered by coughing too hard or too often.

If you are not a smoker and experiencing coughing fits similar to smoker’s cough, it may be an indication of a lung problem and you should schedule an appointment asap. The Cleveland Clinic provides an article describing the many ways smoking can lead to or worsen back pain

If you have recently performed a lot of heavy lifting or some other physically intense activity, you may have strained a muscle. The chances of strained muscles increase if you did not stretch properly before or after the activity. In many cases, you won’t notice the strain until the next day. However, excessive coughing, sneezing, or even laughing may alert you to a strained muscle.

1 thought on “Why Does My Back Hurt When I Cough or Sneeze?”