When upper back pain occurs between the shoulder blades, it can be frustrating beyond belief. This type of pain, known as interscapular pain, is located at a key portion of the back. In this area are two sets of muscles that help hold the shoulder blades in place, a portion of the heart and lungs, the esophagus, and the spine. As a result, pain between your should blades may be caused by anything from minor annoyances to life-threatening issues.

When feeling pain between the shoulder blades, it’s important to consider potential causes, such as a muscle strain. Additionally, you should make note of any other symptoms and consult with a physician, especially if you have a history of serious conditions or are at high risk due to obesity, heavy smoking, or other factors. Here we’ve grouped the most common causes of back pain between the shoulder blades into two groups: common causes and uncommon causes. 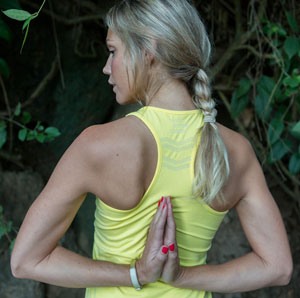 By far the most common cause of pain between the shoulder blade and spine is a muscle strain or damage. A muscle strain is caused by over-exertion, poor posture, excessive lifting, or activities which involve a lot of twisting.

A common side effect of strain is a muscle spasm, which is a sharp or burning pain created by the muscle clenching and failing to release. (see How to Stop Back Spasms Fast)

A pinched nerve in a shoulder is also another possibility for the pain you’re experiencing. This can be due to muscle tightness, injury, or a host of other issues.

A more severe form of muscle damage is trauma. Problems such as rotator cuff tears and shoulder separation may cause lasting pain until the muscle heals. Muscle trauma requires a longer recovery time and possibly surgery.

Chronic acid reflux may be a sign that you have gatroesophageal reflux disease (GERD). GERD produces several symptoms, such as hoarseness, sore throat, chest pain, and difficulty in swallowing. It can also result in referred interscapular pain. Left untreated, GERD can eventually lead to esophageal cancer.

Some pain between the shoulder blades may be caused by arthritis in either the neck or ribs. Arthritis in the neck may or may not be accompanied by neck pain.

Spinal discs are an integral part of the musculoskeletal system, providing a cushion for the individual bones of the spine. When one of these suffers a herniation, bulges, or becomes otherwise damaged by disease, it can cause referred pain to various parts of the back or numbness in limbs. This makes it difficult to locate without an MRI.

Scoliosis is an unnatural sideways curving of the spine. The condition usually first manifests just before puberty and grows worse as you age. While some diseases are known to cause scoliosis, the reasons for this condition appearing in otherwise healthy children is unknown. A common symptom of scoliosis is pain along the spine.

Issues with the gall bladder are notorious for causing referred pain. Sometimes accompanied by nausea and pain in the upper right portion of the abdomen, the referred pain translates as a sharp stabbing between the shoulder blades.

Gall stones are another cause of referred pain to the shoulder blades. Other symptoms include pain in the right shoulder and pain in either the upper right portion of your abdomen or just below the breastbone. Gall stones cause pain when they block a duct, and the resulting pain may last anywhere from a few minutes to a few hours.

Shingles is a viral infection caused by the same virus which causes chicken pox but mainly affects individuals over 50. Viral cells remain in the nerve tissue around the spinal cord and brain. They lie dormant for years or even decades, and can emerge as shingles.

Known best for the rash which forms on your torso, shingles can be very painful, affecting the nerves where the infection lies. This can often lead to pain between the shoulder blades, although it more commonly affects the left or right side. 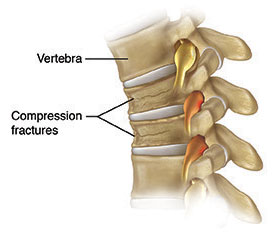 The vertebrae which make up your spine can become weakened and eventually begin to crumple under gravity. This causes a variety of problems, from height loss to a hunched appearance.

One of the other major side effects is back pain, which may radiate out from the actual fracture point to other parts along the spine.

Heart attack symptoms do not always revolve around chest pain. In fact, it is estimated that three percent of heart attacks begin with interscapular pain. This throbbing pain may be accompanied by or lead to chest pain, shortness of breath, lightheadedness, or other symptoms.

While there have been no conclusive studies, it is widely believed that women have a higher chance of this symptom occurring then men.

Numerous forms of cancer have been known to cause pain between the shoulder blades, sometimes without any other symptom. Lung cancer may create pressure to the nerves near the top of the lungs, causing referred pain to the shoulder blade area. This is especially true of Pancoast tumors.

Cancers which have spread to the bones in the neck, such as breast cancer, often create interscapular pain. Other forms of cancer known to affect this area are esophageal cancer, liver cancer, lymphoma, and mesothelioma.

Sometimes referred to as a thoracic aorta rupture, this is a potentially life-threatening condition which requires immediate medical attention. In an aortic dissection, a tear forms, allowing blood to leak between the walls of the aorta. If the outer wall ruptures, the resulting rapid blood loss teds to be fatal.

Thankfully, this condition is rare, affecting mainly men in their 60s and 70s, and can be treated if caught early. One of the symptoms associated with aortic dissection is a sharp pain in the upper middle back.

This serious condition occurs when a blood clot or other clump of material becomes lodged in an artery of the lungs. The most common source of these clots is deep vein thrombosis, which usually occurs in the leg. In many cases, there are multiple clots involved, although they may not occur all at once. The parts of the lung which are served by the blocked artery may die, and undiagnosed cases have a one-in-three fatality rate.

Having back pain between your shoulder blades is only one of the possible symptoms caused by a pulmonary embolism. Most typically, it is accompanied by shortness of breath or difficulty breathing. When diagnosed and treated, survival rates are much higher.