Joking about someone being a pain in the butt may be common, but so is actual buttock pain. There are numerous reasons you may feel pain in your posterior, some of which are minor. However, some may also be signs of a serious illness. The following are some of the many potential causes of backside pain.

One common source of buttock pain is osteoarthritis. Caused by simple wear and tear, arthritis affects the ligaments and can easily lead to a dull ache in the vicinity of the damage. Oddly enough, arthritis isn’t always the direct cause of pain, as the damaged ligaments can also lead to inflammation of the joint or muscle pain.

The tailbone (coccyx) is another common source of pain. Located just above the anus, strain to the covering ligaments can create pain that varies from mild discomfort to excruciating. Coccygeal pain may also be caused from sitting on a hard surface, causing pressure against the tailbone and tissues covering it.

Also known as hamstring tendonitis, this pain is caused by an inflammation at the origin point of the hamstrings. It creates a tightness in the hamstrings and pain when sitting. The pain has often been describes as a sharp pain similar to a toothache.

Bursitis is caused when inflammation affects the fluid-filled sacs (bursae) that cushioning your joints. Ischial bursitis affects the bursae between the gluteus maximus and the edge of the bones on which you sit. The condition is most often caused by prolonged sitting on a hard surface that applies pressure to the lower or mid buttock area.

Putting more weight upon one side may lead to pain in the let buttock or right. It is sometimes also referred to as weaver’s bottom.

This condition is caused by compression or contraction of the piriformis muscle against the sciatic nerve, Caused most often by muscle trauma or over-exertion, piriformis syndrome can cause tingling, numbness, or pain that radiates as far down as the foot. The National Academy of Sports Medicine (NASM) offers an in-depth look at this problem and some of its treatments.

The sacroiliac joint is located between the base of the spine and the pelvic bone. Pain in this joint may be caused by a variety of reasons, such as too little or too much movement, changes in weight, or even as a side effect of pregnancy. 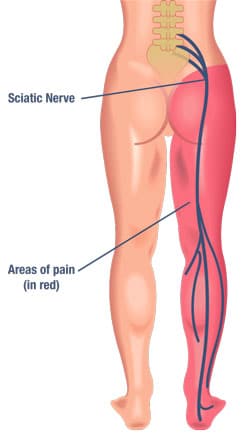 The sciatic nerve connects the lower spine to the nerves in the legs, and is the largest nerve in your body.When this nerve becomes pinched, it can lead to numbness or pain in the right buttock, left buttock, lower back, and even below the knees.

Sciatica is also often caused by a herniated disk creating pressure on the nerve. While the pain can be intense, this condition can often be treated by medications such as muscle relaxants, depending upon the cause.

While best known for the rash that forms on your abdomen, shingles are caused by a virus which lies dormant in your nervous system after a case of chicken pox. When the viral cells become active, they affect the nerve tissue surrounding them. This can lead to sharp pain in the back, head, or buttocks.

Commonly referred to as “knots”, these tiny, sensitive nodules form within muscle tissue. when pressed or irritated, they can cause referred pain far from the trigger point’s location. Nodules in the back or calves are often the cause of buttock pain.

There are also 13 common trigger points found between the three major muscles of the buttocks. See our Trigger Point Therapy Self Massage series for more info.